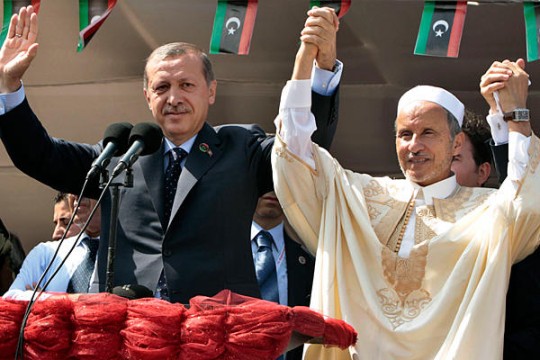 Turkey’s economic minister, Zafer Ça?layan, arrived with a delegation in Libya to discuss financial affairs with the Libyan government amongst which is the debt between them. Majority of those in the delegation which arrived on Monday are businessmen.
A closed door meeting with the Libyan Prime Minister, Ali Zeidan was held over the long outstanding Libyan debt them. The Libyan Prime Minister Ali Zeidan at a joint press conference signaled on Tuesday that the country would put off payments to Turkish construction firms worth around $1.6 billion.
Reports in Libya are claiming that debts could be as high as $20 billion and have been accumulated during the era of Colonel Kaddafi’s rule. The prime minister has urged the people to be patient as the government strives to rebuild a country devastated by the civil war which ended decades of ruling by Gaddafi after taking over from a coup d’état.
During the press conference, Prime Minister Zeidan reminded his compatriots that they are “in an extremely difficult period” and pointed out that they “have outstanding bills both at home and abroad.” Zeidan said he was waiting for an agreement from Turkish firms and Ankara to a delay the payments, though he promised during a press conference that “whatever our past promises were, we will work to honor them.” The prime minister also invited Turkish firms to help in the massive task of rebuilding the country’s infrastructure, housing and industry which has been heavily damaged.
Speaking at the press conference, the Turkish economic minister said they will continue to collaborate with the Libyan government in finding a solution to the repayment of the debts adding that Ankara has remained largely sympathetic to the new Libyan government’s needs.