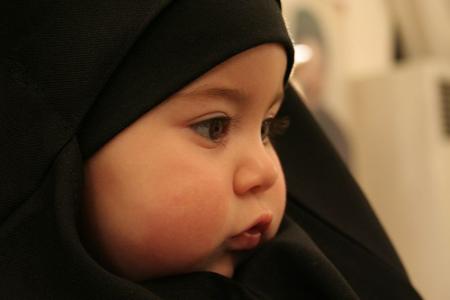 In Saudi Arabia it is known that women are deprived of many rights that might have been considered as essential and normal elsewhere. These restrictions include driving cars and travelling without authorization from their male guardians. In case of breach of these laws they can be punished and be sentenced to pay a penalty or serve jail time. However, concerning the obligation to be veiled, girls are supposed to start covering their head once they reach puberty. But a statement made by a Saudi cleric on Tuesday on television sparked outrage in this very conservative kingdom. This cleric called Abdullah Daoud affirmed on an Islamic channel Al Majd that «Girls should wear the veil from the age of two.” He justified himself by seeing that this is an act of protection against perverts because her parents will be doing her a service by covering her face and making her wear the veil. The moment his interview was posted on the Internet social networks and the local press joined the protest.

A Saudi columnist Badria Al Bisher was shocked by Daoud’s proposal and insisted that protecting little girls against sexual harassment can only be done by enforcing more severe laws on culprits and by raising awareness at school and on media outlets. Even Saudi tweeters were furious and expressed their anger by even insinuating that behind such statements lies “sex obsession.” Some journalists like Halima Muthffar even twitted that the best solution to prevent women’s attack by this kind of men would be “exiling women old or young to remote countries.” Finally, many known clerics joined the protest by announcing on television that they hope that this kind of absurd proposals won’t be taken as a religious obligation since some people have a tendency to exaggerate everything.