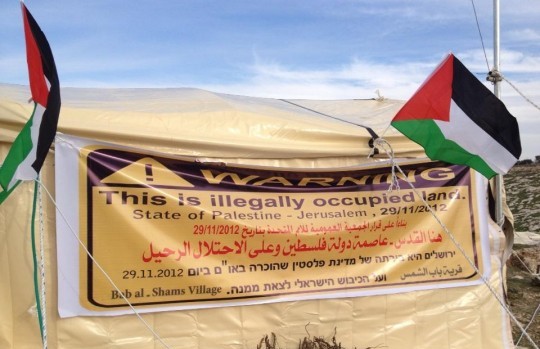 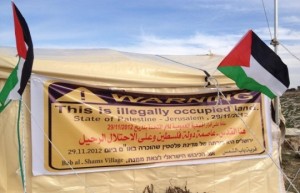 Six weeks ago Israel’s Prime Minister Netanyahu announced that the area called E1 located between Jerusalem and the West Bank settlement was going to be developed. Following which the Palestinian representatives and western diplomats clearly expressed their disagreement because it will damage the prospect of creating a Palestinian state. That was why a group of activists decided to secretly organize a non-violent resistance. They decided to set up a village called Bab al-Shams (“gate of the sun”) with around 20 tents on Friday morning on a land that is privately owned by Palestine but that has been earmarked for settlement development by Israel. The 200 Palestinians that were present at the camp were trained in non-violent resistance techniques and were ready to face the army that they knew would come. Afterwards, they made sure that they have the legal protection necessary by asking the Supreme Court to grant them an injunction against eviction which was given to them. However, on Saturday evening, Israel’s Prime Minister declared the area to be a military zone despite the Supreme Court’s decision. Thus early Sunday morning hundreds of security officials invaded the encampment and arrested all the protesters amongst which six were injured. Amongst those arrested, Palestinian legislator Mustafa Barghouti said that the eviction showed the whole world “that the Israeli government operates an apartheid system by deciding that Supreme Court decisions do not apply to Palestinians.” In addition, many expressed their indignation by the fact that more than 120 Israeli have established their homes illegally in the West Bank but nothing is done against them on the contrary they are being legalized one by one. Later on Sunday Netanyahu made a statement on the Israeli army radio on which he said that the protestors “have no reason to be there.”