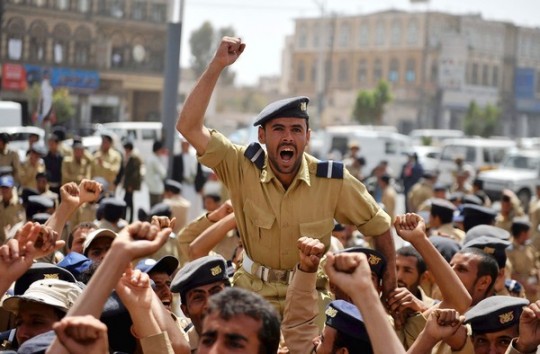 According to the 15th term of Yemen’s military law, any university educated soldier has the right to be promoted to second lieutenant once he gets a degree.  However, many soldiers believe they have been ripped off their rights because even though they struggled to afford a proper education they did not receive the proper compensation they think they deserve. One of them is Rafeeq Ali, a soldier at the Interior Ministry who has to struggle with his wife and six children just to survive with a salary that is not equivalent to the certificate he gained at the University of Sana and despite his 27 years service at the Ministry. Generally he said that soliders are not paid more than YR40 000 (about $180) per month and some soldiers only receive YR20 000 which makes their life miserable with the increase of expenses in Yemen. Ali is not the only one in this difficult situation, many of them are obliged to find for additional work to makes end meet. Because of this, soldiers from the Interior and Defense ministries decided to stage several protests in front of the Parliament chanting slogans to gain better life conditions, promotions as well as higher salaries. They believe that the law is on their side since according to Yemeni law what happened to them is illegal. They used this occasion to stress the fact that their salaries are the smallest compared to other national professions and that this makes them underperform. Some even say that their request should be considered carefully because they are now put on par with beggars because their salary is less compared to what they used to receive before the recent revolution. Following the demonstration the Saleh promised changes soon to come but no effective transformation was made.