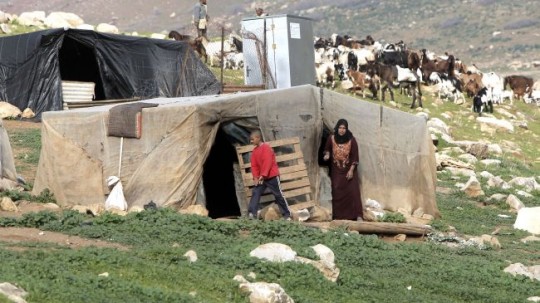 In Jericho for the second consecutive year Bedouin Palestinians received orders to leave their homes in the Jordan Valley since the Israeli army wished to carry out exercises. According to a photographer that witnessed the scene, almost 500 people including “women, children and elderly people” were evacuated. The Palestinian governor of the region, Majid Al Fitiani said in a statement that these exercises could have been done in another area of the West Bank but such kind of injustice is quite frequent in the area. On the evacuation orders that were given to the residents a week ago they were told to prepare for a 24 hour evacuation and a note was added to remind them that they houses have been constructed illegally. However the Israeli military forces pledged that they would allow their return once the routine exercise was done. These residencies that are located close to military zones could not obtain permits because according to Palestinians and rights activists it is almost impossible to get any authorization of this kind from the Israeli government. That is why in addition to the frequent expulsions from their homes inhabitants also fear Israeli demolitions at any time. Plus according to the UN’s Office for the Coordination of Humanitarian Affairs the fact that these “3,400 people are living partially or fully in closed military zones makes them face high risk of forced eviction permanently.” At the same time, the Palestinian government of the region is facing another difficulty: Israel took the decision to transfer tax and tariff funds that were being collected in the name of Palestinians. That is why they are now forced to ask Arab nations to give them the cash supply they were promised of $100m a month.