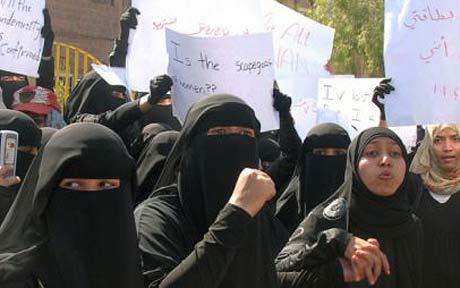 On Saturday a protest was initiated in Sana’a University by students attending the campus as well as many other activists which were responsible for the injury of several students. These students gathered at the eastern entrance of the university after the launching of a campaign called the Ana Nazel (I’m participating). Since Ali Mohsen Al-Ahmar, former commander of the First Armored Division (FAD) joined the revolution in 2011; soldiers were deployed at the university.  During the confrontation with the pro-Saleh forces last year, they built barricades in the university ground and have been there for a whole year.
For a few months now students felt uncomfortable in this atmosphere so they demanded several times that the FAD soldiers be replaced by civil guards but nothing was done.  In order to protest against this military presence in their place of education students of this faculty decided to organize a protest by alerting everyone to join through Facebook. They chanted slogans demanding the departure of the military. Then they went to the Ministry of Higher Education in order to give a statement in which they expressed their demand. But the protest did not go one peacefully; the Cabinet guards fired bullets at the students and then used batons to beat them up causing injuries to the students. In result; the chancellor of Sana’a University, Doctor Al-Shearjabi, had to have a serious talk with Mohsen Al-Ahmar which led to the agreement of the removal of all armed forces from the campus in a week.  The chancellor expressed his satisfaction with this negotiation and the fact that Al-Ahmar cooperated in allowing the educational process to follow its normal route. He also said that he is determined to keep political conflicts away from his university in the years to com.