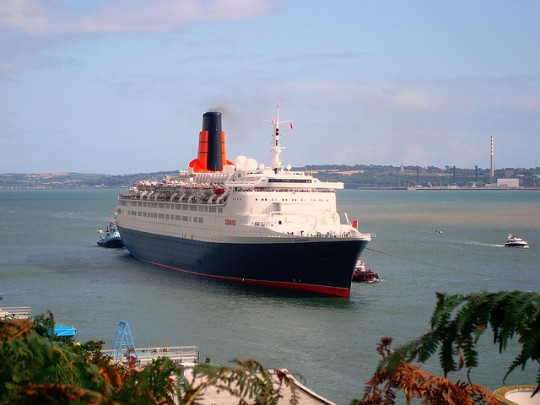 It is being speculated that the world famous liner QE2 that was retired since 2008 and that made its last trip to Dubai last year will be sold to a Chinese firm. This comes as a surprise for many because since July the owner of the liner, Istithmar, had expressed his desire to turn the legendary boat into a 300-room luxury floating hotel in order to ameliorate and transform the Port of Rashid were it is currently located.
The launch of such kind of hotel would have allowed rebuilding the tourism economy in the region creating as well many job opportunities. But British media reported that a Chinese crew of 20 people is on board and that created the fear that the boat will be sold for scrap. The fact that the QE2 has a long and adventurous made it a unique peace that a British consortium wanted to move to London and make of it a luxurious floating hotel.
Launched in 1969 by the Queen it has been making all-round trips from Southampton to New York for 30 years. However according to the UK media the British group that was meant to acquire the liner abandoned its plans once they found out that Chinese were going to buy it. According to the report that was published on Monday the 293m-long vessel was bought from Cunard for around $100m in June 2007 by the Dubai-based investment company but it is expected to be sold for £20m.
The British had offered this sum in addition to £60m that will be needed for renovation and the cost of bringing the ship back to Britain. But the same amount of money was offered by the Chinese that are seemingly willing to pay immediately unlike the UK offer which will be convenient for the owner.