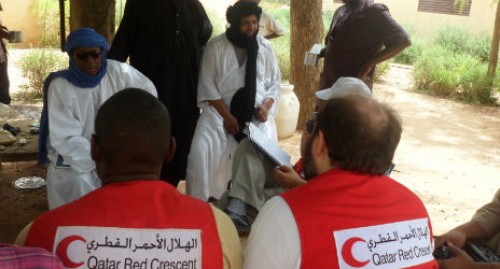 The Tuareg rebellion had allowed Islamist groups in Mali take control of the north. Currently, a military intervention is being prepared by  ECOWAS to regain this territory. At the same time it is being suggested more and more that Qatar is taking advantage of the dual crisis that this part of the Sahel has to face. It is true that the presence of Qatar in Mali is already known. To begin with, Qatari Red Crescent aid is being provided in Mali particularly around the triangle of Gao, Timbuktu and Kidal. It has also been established that Qatar has been funding projects to build religious schools and charities as it has been doin in other Muslim-majority countries in Africa.
However, new information has been printed by the French and international press alleging that Qatar has been funding armed groups and that certain rebel factions are receiving training by Qatar’s Special Forces. The country’s intervention in such a way is not the first time according to the press. It started with the Arab Spring where it financed political parties such as the the Muslim Brotherhood in Tunisia and Egypt. Qatar also played the role of a mediator in Sudan and engaged in the NATO coalition that put an end to the regime of Muammar Gaddafi in 2011.
Concerning the intervention in Mali no acceptable proof has been provided but if proved it might put Qatar in a dangerous situation. The simple assumption that Qatar would benefit from the crisis in increasing its influence in West Africa and the Sahel is not well received by Algeria. Although recent agreements have been signed between the two of them, they still oppose each other in their competition for gas exports and in the political arena. In addition the United States, France, the African Union might not appreciate the intervention.