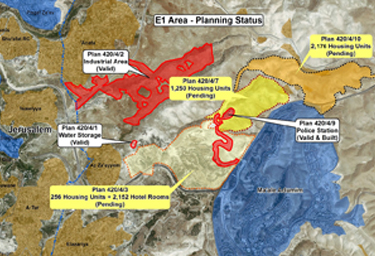 Mr. Essawy, 65, used to be an eminent member of a clan who passed away just a few months ago.  He was buried on land owned by his family located between East Jerusalem and the large Israeli settlement of Maale Adumim. This area is known as E1 which is an absolute empty land of the West Bank has now become the most sensitive pieces of real estate. The Israelis have plans to annex E1 so no muslim graves are to be built in the region. That is why M. Essawy’s family was asked to remove their grandfather’s house.  On the other hand for Palestinians, E1 is the only way they have to achieve an independent state with East Jerusalem as their capital. They not only wish to create a connection between East Jerusalem and the West Bank, but they also want to build housing for refugees and their children. East 1 is also essential to the creation of a north-south route through the West Bank from Ramallah to Bethlehem. To which Israeli officials say that the creation of a system of protected roads and tunnels through E1 could allow Palestinians passage.
This land, East 1, is actually proof that negotiations have failed since each side tries to outmaneuver the other with unilateral actions. The World however is most of the time left on the sideline and the only thing they can do is express their discontent, like Washington did in warning up till now Israeli governments not to start building there. Israel was complying to this but the fact that Palestine was recognized as a nonmember observer state was to the Israeli and Washington a violation of the 1993 Oslo Accords which explains the sudden urge of Israel to start construction in the area.