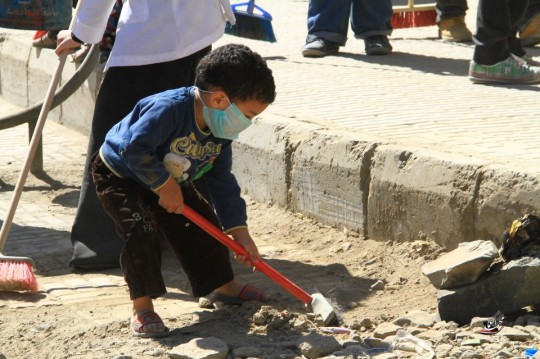 A few days ago almost 200,000 Yemenis residing in Sana participated in a cleaning campaign called “Sharik 12/12”.  The general public had to share street cleaners’ task for a day in order to create awareness about the necessity of keeping their city clean. These streets that have been swept by residents have unfortunately already regained their initial status five days after the campaign. After removing over 6,000 tons of garbage the accumulation of dust and construction waste covered the whole place. Secretariat’s Technical Department located in the capital saw the necessity of buying more equipments. The first step was to plan the distribution of trashcans around the city.  The “Yemmena Tabda min Huna” which means “Our Yemen starts here” initiative, which was the organization that allowed the happening of the  Sharik campaign is preparing plans to touch other governorates with similar actions according to Mohammed Al-Zubaidi the executive manager. The next town that is aimed is the city of Ibb where a similar mass cleaning day will occur on January 1st.
Afterwards it is hoped that Aden and Taiz will also try to implement a similar initiative. Organizers of the Sharik Campaign have also other plans to peruse the promotion of cultural messages that are capable of empowering citizens to feel proud of their city. They started gathering signatures last Wednesday for the world’s largest signed flag. The record is currently held by Japan with 35 000 signatures but the organization aims to have more than 40,000 signatures on the flag by the first day of the year. Each signature implies that the citizen is pledging that he will keep his city clean. The flag is now under the protective eyes of military and security camps whose militaries are going to all sign it to secure their commitment.