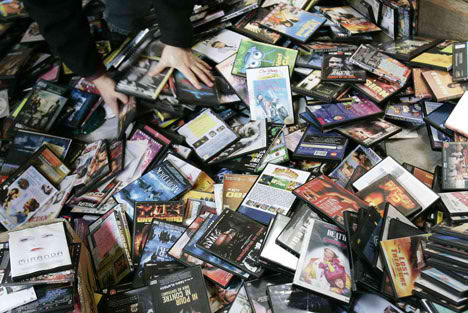 Many shops in Yemen sell pirated CDs and software openly and in a way that is accepted by the whole population. Prices of this kind of technology go as low as $1 USD which makes it preferable for Yemenis instead of originals which are much more expensive. For the past few years the government has been promising to support intellectual property rights. However besides some intensified awareness campaigns, Yemeni programmers and information technology (IT) technicians are not satisfied with the protection they are lacking in creative programs and software. According to Engineer and programmer Abdul-Kareem Nahshal, the government has to start taking serious steps toward fighting piracy. He believe that the actual situation for technicians is blocking them “from improving this field,” he also added that “there are no authorities that punish hackers and deter them from hacking our work.” Even governmental facilities are victims of piracy and he implied that the government unintentionally might have a role in the increasing of piracy and hacking of state ministries and offices because the facilities are outdated. He suggested that computers and softwares haven’t been renewed for years. In fact, even students in IT and programming do not have a modern lesson that gives them the skill that can be used in the market. That is why a group of technicians and programmers just created the Telecommunications and Information Technology Syndicate that wished to raise awareness about the fundamental role technology has for Yemen’s future. They also plan to fight piracy and hacking. Currently; they are trying to propose a bill that will protect their work with the assistance of lawyers and the Ministry of Legal Affairs. In addition they also provide some associations and schools with free computer training although they receive no fund from the government.