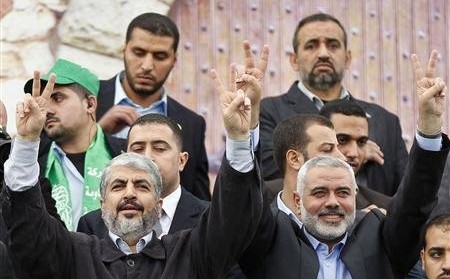 This year Hamas’s anniversary celebration was held earlier to commemorate the first uprising against Israel as well. Ismail Haniya, the Hamas prime minister in Gaza and Mr. Meshal emerged together in front of thousands of supporters to celebrate the 25th anniversary of the founding of Hamas.
Mr. Meshal for whom it is the first trip to Gaza after 45 years of exile made a provocative speech in a joyous but not conciliatory mood. To begin with he claimed that for Hamas Israel’s occupation legitimacy will never be recognized and freeing Jerusalem still remains one of their main objectives. He also assured Palestinian prisoner that are held captive in Israel that they would also be freed by methods that were performant in the past including kidnapping Israelis and using them as bargaining tools.
These statements reflect the principles Hamas has been following for years but no new specific threats were made toward Israel. None the less, it reinforces Israel’s belief that Hamas remains an enemy that would continue using military force to gain what it wishes. One of the main things he also promised in his speech on the Palestinian unity on the basis of Hama’s principles; which implies that the main Palestinian faction in West Bank, Fatah, which is the only legal representative of the Palestinian people, would have to subordinate to Hamas.
Despite this, he recognized that the United Nations General Assembly’s vote granting Palestinians enhanced status as a nonmember observer state that was accomplished by President Mahmoud Abbas of Fatah “a small step but a good one.” Finally he expressed his wish that the latest fighting and victory in Egypt of the Muslim Brotherhood of which Hamas is the Palestinian branch serve as an example to pursue the Arab revolution in all Palestine.