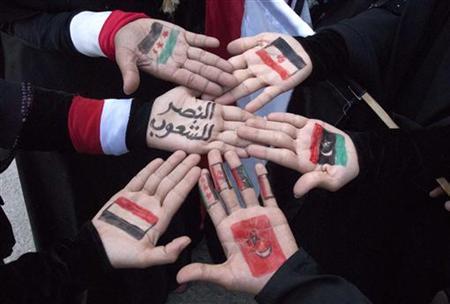 During a conference entitled Trust Women that was organized by the Thomson Reuters Foundation and The International Herald Tribune Middle East female rights activists to talk about the women situation during the Arab Spring that are occurring. First, Queen Noor, widow of King Hussein of Jordan, expressed her concerns that the Arab Spring might have given way to political Islam and set back the cause of women’s rights.  She cited ratings by the World Economic Forum on the gender equality in the region which has evolved in the past two years by 1.2 percent, despite a 5.3 percent drop in Syria. This is a sign that war is the main reason that women’s right is not advancing. During the conference that was held on Tuesday, Egypt’s case was also brought up. It was pointed out that no women were in the committee that drafted the constitution and the percentage of female legislators went from 12% to 2% since parliamentary quotas were abolished. Dina Wahba, a women’s rights activist, said the constitution that is to be voted on in mid December is endangering the rights women had to fight to get for many years. A Bahraini writer and activist Ala’a Shehabi said that women were the ones that led the uprising and that they were fighting a; bout inequality and not about economical reasons like the other countries in the regions. Manal al-Sharif, another women’s rights activist from Saudi Arabia, said it was the same case in her country too where women are fighting for change. For Libya, the political change allowed women to be more involved according to activist Alaa Murabit. Finally, Ayaan Hirsi Ali, the founder of the AHA Foundation working towards the protection of Muslim women rights, called for an end to male guardianship in which women are placed under.