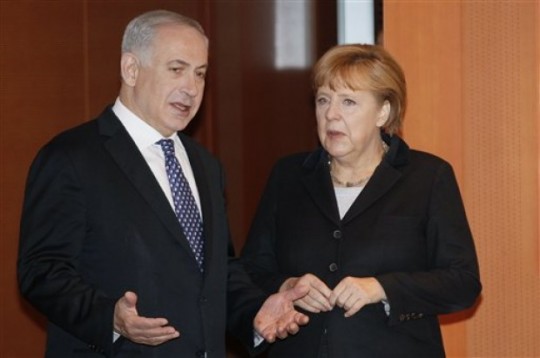 A week ago, the UN General Assembly voted that Palestine is recognized as a state. However, the European Union did not present a united front when the vote was made.
Countries such as Britain, Italy, France and Germany which are the closest allies of Israel either abstained or voted with the Palestinians. Especially Germany’s choice which abstained rather than vote against a Palestinian state came as a shock to Israel.  The amicable meeting that was planned between Netanyahu and Chancellor Angela Merkel on Wednesday turned into a tense discussion. In addition the announcement made by Israel on Friday to start construction in an area near Jerusalem  that breaks the link between the West Bank and the capital Palestine wanted to have East Jerusalem increased displeasure of the Chancellor against Israel’s Prime Minister. The issue might even overshadow cooperation programs in science, education and business the two governments had planned. Nevertheless, analysts believe that no fundamental change in Germany’s overall policy toward Israel would be made since the country’s support has been deeply rooted in German policy that is due to the sense of responsibility that goes back to the Nazi Holocaust. But it doesn’t change the fact that Angela Merkel seems concerned about the long-term plan to create a Jewish Israel next to a Palestinian nation. When Prime Minister Netanyahu announced his support for a Palestinian state in 2009 he was clear on what preparations he had made to make this plan a reality.
To have the two-state solution Merkel believes that both sides would have to make compromises because unilateral Palestinian win in the United Nations on one side or Israel’s settlements plans on the other won’t allow the situation to progress.