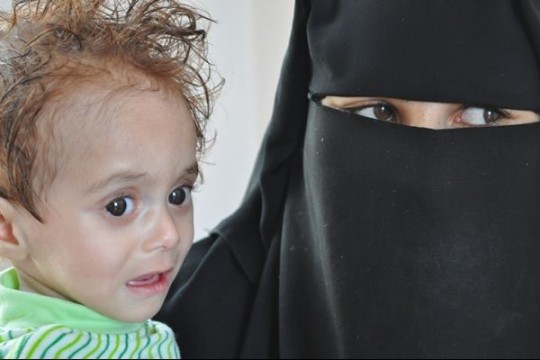 In Yemen, health centers around Bajil are becoming more and more crowded by mothers that come seeking treatment for their children that are suffering from malnourishment, defined by UNICEF as “a consequence of insufficient food consumption and the repeated appearance of infectious diseases”. Malnourishment is becoming more frequent in the country due to the critical economic situation of families that are having difficulties to make ends meet every month. Latifa Baltifa, a nutritionist working for the World Food Program, pointed out that the number of malnourished children in the country has increased since 2009. Especially in regions such as Hodeida where high poverty and low awareness of health issues have made the numbers reach 22%. Nationwide, “the percentage of malnourishment reached 15.5 percent in all the governorates nationwide,” she said. In recent reports reported by the UNICEF, that makes 57% of young Yemenis, almost 250,000 children that are suffering from chronic malnutrition. Which according to Save the Children is when children “fail to grow to their full genetic potential, both mentally and physically” In order to provide support Yemen, developed countries have decided to collaborate with the World Food Program.
Once donations are provided to this organization, food and money are distributed to the countries that need the help. That is why an aid program has been launched which concentrates on three groups: children younger than two years old to protect them against malnourishment, children who are more than two years old and suffer from malnourishment and mothers who suffer from malnourishment. For the project to be realized Yemen received $15 million and a 17,000 metric ton shipment of wheat from the U.S. In addition, Turkey is also on its way to support Yemen’s healthcare by making long-term investments that would allow children to access improved health services and clean drinking water.