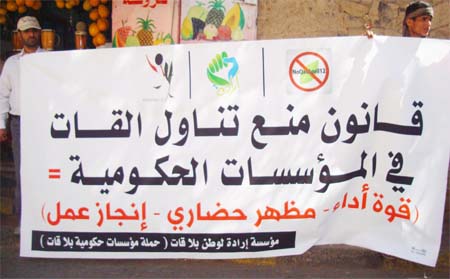 80% of Yemen population is believed to chew qat. This plant that posses narcotic properties is seen as an institution of Yemeni culture which brings people together and creates a particular atmosphere specific to Yemen and its people. However, many anti-qat campaigners have been working relentlessly to eradicate or at least decrease the use of qat in Yemen. Despite the work that was done to make the population aware about the hazards qat may have on health and the environmental impact of growing this leaf, its consumption hasn’t decreased that much for the past few years. Qat, for some, has such a high socio-economical place in Yemen that trying to stop its production will likely bring crisis to the country. Thousands of Yemenis are employed in the qat industry making it their main source of income. Amongst these thousands of citizens many farmers even succeeded into making it a profitable career. In addition as pointed out by qat farmer Adel Sadan “the government and organizations should help find solutions and other options for qat traders”. This last concern has also been the subject of reflexion for Hind Aleryani, a journalist and prominent anti-qat complainer as well as those sharing her view. She also believes that the government should provide better alternatives but until a productive solution is given by the concerned offices she cites the example of reconverted qat farmers in Haraz district in Sana’a that have replaced qat with almonds or raisins. This initiative is also supported by Human Rights Minister as well as the offices of the Ministers of Information and Education. This campaigner that believes that wide reach of social media networks will allow her to promote her agenda stated that those sharing her view are gaining ground a step at a time.