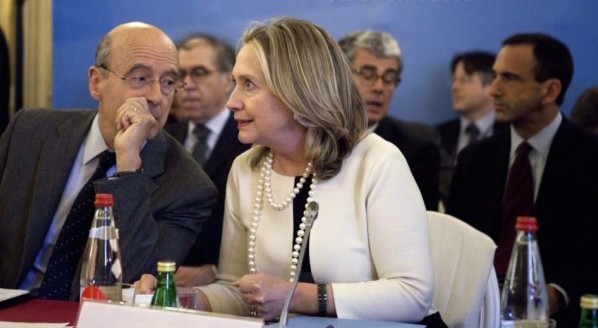 As government forces intensify their aerial attacks, the opposition might soon be going through in what could be considered as a reform after the US secretary of state, Hillary Clinton, said that the opposition factor called the Syrian National Council (SNC) should work towards including those who are “in the frontlines fighting and dying today to obtain their freedom.”
The US is of one of the many powerful countries supporting the rebels in Syria and Clinton said that next week’s meeting in Qatar would be used as an occasion to call upon more people in order to widen the coalition scope against President Assad.
The SNC has been receiving tremendous support from countries against Assad’s regime but the lack of unity within the council and with the different groups fighting government forces in Syria has limited its effects in the campaign to oust Assad. Most of the members are largely foreign-based political groups but the recent comments of Clinton seem to highlight that all is not well within the group and between its supporters, the Friends of Syria. Secretary of state Clinton said that  it “cannot be an opposition represented by people who have many good attributes but who, in many instances, have not been inside Syria for 20, 30, 40 years.”
Ahead of next week’s meeting, U.S is already pushing for “an opposition that can speak to every segment and every geographic part of Syria… (and will be) strongly resisting the efforts by extremists to hijack the Syrian revolution.”
Clinton also revealed that they were able to “smuggle out” members of the Syrian opposition present in Syria for a meeting in New York last month for them to argue their case for inclusion. Recommendations of names and organizations have already been given for any leadership structure.