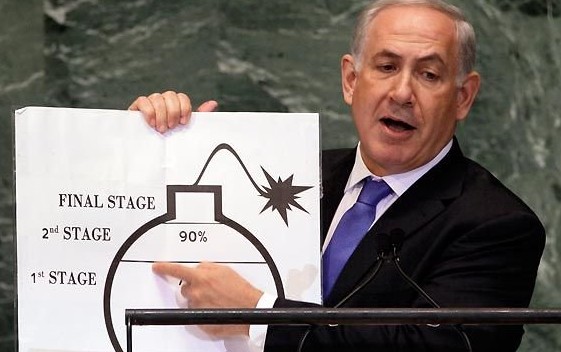 “Red lines don’t lead to war, red lines prevent war. Nothing could imperil the world more than a nuclear-armed Iran.”  Such were the stern remarks of Benjamin Netanyahu during his speech at the UN General Assembly.
He claimed that Iran could have the necessary materials necessary to produce a nuclear bomb by mid next year because the Iranian nuclear program “does not take time out.” Seven years of economic sanctions and political isolation has done little to discourage Iran from pursuing its nuclear ambitions and Netanyahu is worried that time is running out and diplomacy is failing as he thinks that “the hour is very late.” He told the general Assembly that he believes that a no-cross point that he referred to as a “clear red line” is needed and once that is boldly outlined, “Iran will back down.”
Israel is counting on US support to launch an attack on Iran as it said earlier on that such a move will be coordinated with its greatest ally but the latter gives priority to sanctions and multilateral negotiations to work without ruling out a military action nor committing itself to drawing red lines. However, president Obama said that they will have to do what they must do to stop Iran from acquiring nuclear weapons.
Iranian President, Mahmoud Ahmadinejad, has recently accused Western countries of nuclear “intimidation” before lambasting Israel. “Continued threat by the uncivilized Zionists [Israel] to resort to military action is a clear example of this bitter reality,” Ahmadinejad told the General Assembly on Wednesday.