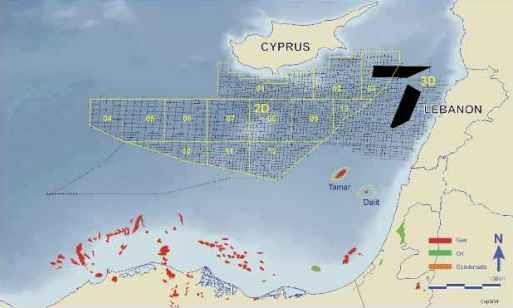 Hopes in Lebanon are high as reports carry out that its offshore natural gas deposits in the eastern Mediterranean is greater than that of Cyprus and Syria after a just it concluded 3D seismic survey, citing the CEO of Norway-based Spectrum Company, David Rowlands. The data is being processed and final conclusions will only surface around January 2013.
CEO Rowlands gave an insight of what could be expected as he said that “there is greater potential [for natural gas] offshore Lebanon than offshore Cyprus and offshore Syria.” A study by the US Geological Survey around the Levant Basin estimated almost 122 trillion cubic feet (tcf) of undiscovered, technically recoverable natural gas and holds 1.7billion barrels of undiscovered, technically recoverable oil. The offshore Mediterranean region which stretches from the north of Egypt to the north of Lebanon and south of Cyprus is known as the Levant Basin.
The outcome of the surveying is encouraging because Rowlands said “the early results have shown us structure which has never been seen before,” because the “geological structures are favorable for accumulation of gas and this has never been seen before at this early stage”.  In the past few years, gas field discoveries have been rampant by Israeli companies in the area.
Lebanon’s parliament passed a legislation that was supposed to pave the way for the exploration licenses as it lags behind Israel and Cyprus and is still at the stage of carrying out seismic surveys of its territorial waters to collect data.  The six member Petroleum committee to issue the licenses is yet to be formed too.
If the country overcomes its political differences, tenders could begin by the end of the year or early 2013 and production or extraction in five or eight years later according to experts.