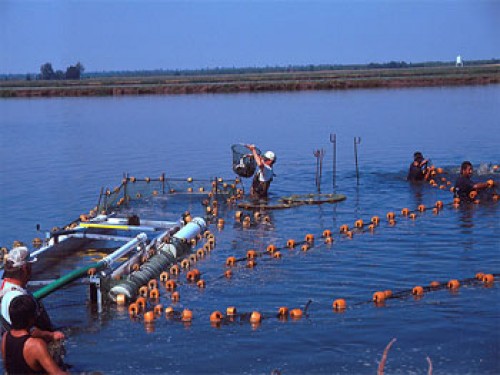 Through its Agriculture and Fisheries minister, Oman has announced that its willingness to venture into aquaculture. Minister Fuad Bin Ja’afar Al Sajwani declared that the doors are open for investment as he urged individuals and specialized companies attracted to the sector to start applying.
The decision which was approved as a ministerial one will abide by the quality control bylaw of 80 articles which was prepared in collaboration with a number of experts from the Sultanate, Food and Agriculture Organization (FAO) and other countries benefitting from more two decades of experience in the activity.
Applicants satisfying the required conditions will have their dossiers submitted to a specialized committee before being handed an initial six month license for the candidates to prepare their feasibility studies which will be evaluated by a technical team before the handing out of a commercialized license.  The winner should implement his plans within 6 months after the signing of the usufruct agreement and failure to do so will lead to the cancellation of the contract.
According to the minister, Oman’s fish production could rise to 220,000 tons by 2030 and he believes the project will bring estimated revenue of 342 million rials and 786.6 million rials to the GDP. He also highlighted that a ton of aquaculture produce can create 50 jobs for the citizens. 3,020 hectares has been approved by the ministry for allocution to the project.
On the available investment opportunities for the private sector, Sajwani added that during the next 10 years, the ministry may play a leading role in meeting the world demand by guided development and effective investment in aqua farming as he cited the geographical location of the country; which also helps it to be a major player in the sector.