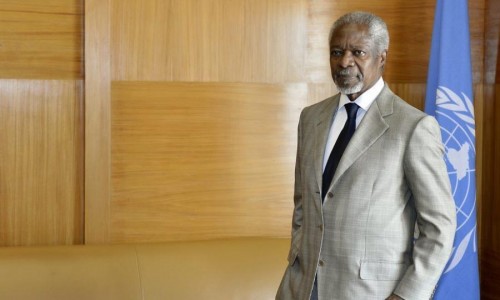 A whole lot of activities are going around the Syrian war as both parties remain reluctant to give up on their objectives. The situation has been stretching on for 17 months with no sign of peace any time soon as both sides continue on their militarization efforts to defend their cause.
Their ambitions and the participation of the international community in flaming up the conflict has forced the Former U.N. Secretary-General, Kofi Annan, to announce well before the expiration of his mandate as the U.N mediator that he has lost the zeal to continue in the same post set to expire at the end of the month.
According to Annan, his decision was motivated by the “finger pointing and name calling” at the sessions of the UN Security Council and the absence of the needed support that was needed for his mission. He stood to the opinion of a political transition saying Assad “will have to leave sooner or later.”
Russia said they regret his decision and described it as a “tragedy”. It claims that it has “very strongly” supported him. Syria’s Foreign Minister said Annan’s decision was provoked by “countries which seek to destabilize Syria” for they have “hindered and continuing to hinder” his efforts.
US blamed China and Russia. The White House said “Assad must go” as reports emerge that President Obama has signed a secret order earlier this year authorizing U.S. support for rebels seeking to depose Bashar al-Assad and his government. The signed order known as an intelligence “finding,” broadly permits the CIA and other U.S. agencies to provide support that could help the rebels oust Assad.