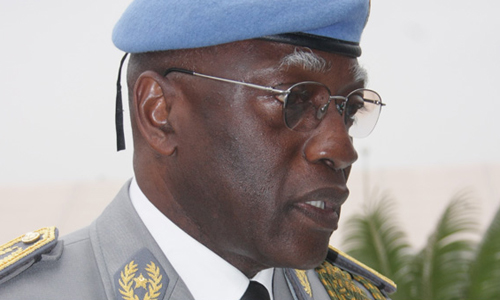 The new head of the UN supervision mission in Syria, Lieutenant General Babacar Gaye of Senegal, arrived in Syria Tuesday to take over from Norwegian Major General Robert Mood.
The UN decided last week to send Lieutenant General Gaye as its new military advisor to Syria in replacement of General Robert Mood.
Gaye told the media he will do his best to “help alleviate the suffering of the Syrian people”.
Lieutenant General Gaye, along with Under-Secretary-General for Peacekeeping, Hervé Ladsous, who is also visiting Damascus, are to have a number of meetings in the next three days or so over the situation in the country.
The mandate of the UN Supervision Mission in Syria (UNSMIS), which expired last Friday, was extended for 30 days by the UN Security Council.
The mission, established in April with an initial 90-day mandate, is tasked with monitoring the cessation of violence in Syria and the full implementation of the international six-point peace plan put forward by the Joint Special Envoy for the UN and the League of Arab States for the Syrian Crisis, Kofi Annan, to end the ongoing crisis.
That plan calls for an end to violence, access for humanitarian agencies to provide relief to those in need, the release of detainees, the start of inclusive political dialogue, and unrestricted access to the country for the international media.
The mission had already reduced the number of its team power from 300 to some 150 due to “security issues and continuous violence” and recently suspended its regular patrols due to the escalating violence in the country.
Over 10,000 people, mostly civilians, have been killed and tens of thousands displaced since the uprising against President Bashar al-Assad began some 16 months ago.