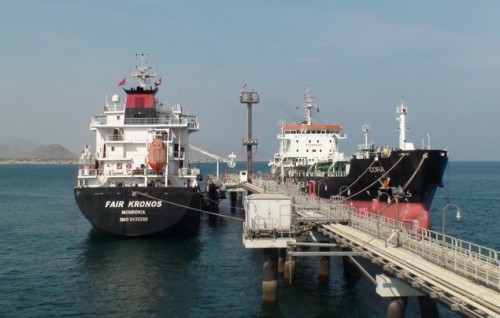 The United Arab Emirates on Sunday launched a new offshore oil export terminal in Fujairah on the Gulf of Oman that will process up to 75 per cent of the Gulf country’s exports.
The terminal has eight crude oil storage tanks, each having a capacity of one million barrel. Exports from the new facility are expected to reach 1.5 million barrels per day.
Oil is conveyed through the 370-km long Abu Dhabi Crude Oil Pipeline from fields in the UAE’s western desert to Fujairah, a major oil storage and fuel bunkering hub on the eastern coast.
The pipeline was constructed to bypass the Strait of Hormuz, thereby cutting the shipping time by two days and lowering production costs.
The purpose of the project is also to secure an alternate oil route and ensure the continued exportation of oil in the event that Iran blockades the Strait of Hormuz. Iranian threats to close the Strait of Hormuz actually grew louder, as the European Union ban on Iranian crude imports came into effect on July 1.
Nearly 35 percent of globally traded oil passes through the Hormuz strait. Saudi Arabia and Oman are the only Gulf countries with terminals outside of Hormuz.
The construction cost of the new Fujairah terminal amounted to $3.29 billion.