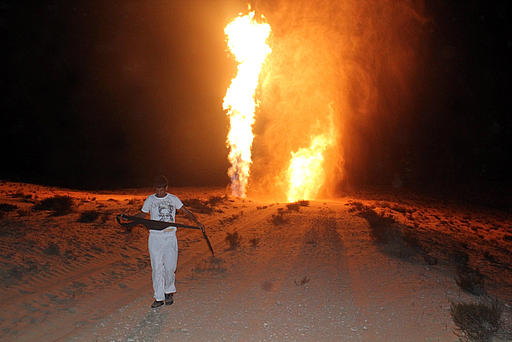 An Egyptian gas pipeline has come under attack again in the northern Sinai town of El-Arish. The recent attack was on a pipeline which exports fuel to Israel and Jordan. Attacks have become frequent since the uprising begun and this is one of the 15th attacks on pipelines in the region since 2011.
Heavily dominated by well armed Bedouin militants, the Sinai region is gaining popularity for the sabotage of pipelines with explosives as the Egyptian government struggles to assure the presence of its security personnel especially after the ousting of President Hosni Mubarak.
The vandalized pipeline once supplied Israel with almost 40% of its natural gas needs but Egypt decided to bring an end to the supply because of what it considers to be a deal concluded below the market rate during Mubarak’s era.
The attack according to an official working with company that manages the pipeline claims that the act will not have an impact of the exports because since during the month of April, the company has stopped exporting gas to Jordan and Israel. The flames seen by the people close to the pipeline was caused by the residual gas in the pipes said the official.
The attacks on the pipelines tend to continue. No group has ever claim responsibility for the attacks but the Bedouins who live around the area are considered to be the ones behind the frequent attacks since 2011.
Egypt’s security woes have been worrying after the departure of Mubarak and the new government is yet to remedy the situation for now.