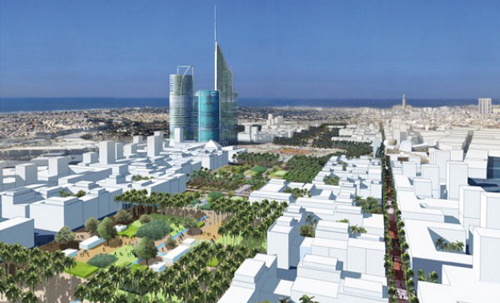 The National Commission of the Casablanca Finance City (CFC), a regional financial hub for investors looking to gain a foothold in the fast-growing markets of Africa, is expected to grant next week  seven CFC status to major financial institutions , says Online Maghreb Intelligence Magazine, citing reliable sources.  A number of other international firms are in the pipeline.
So far, six firms have gained the CFC label and joined Morocco’s emerging financial center set to play a key role in boosting the North and West African country ambitious investment program and economic development projects.
According to experts, the growing number of foreign investors wishing to join CFC shows Morocco’s attractiveness and ability to set itself as a major entry point for emerging countries in Africa.
Steered by CEO Saïd Ibrahimi, CFC offers an attractive package including tax breaks, a competitive legal and regulatory framework, and various facilities to financial institutions, professional services firms, and regional headquarters of multinationals. Over 2,500 international businesses and brands have already set up shop in Morocco, contributing to boosting this comprehensive ecosystem.
After having signed 2 major partnership agreements with the leading international financial centers of Singapore and Luxembourg, the CFC board will be signing an MoU with the top worldwide financial center, the City of London, as well as another one with Paris Europlace. These partnerships are a testimonial of CFC’s international outreach and will support its strategic development.