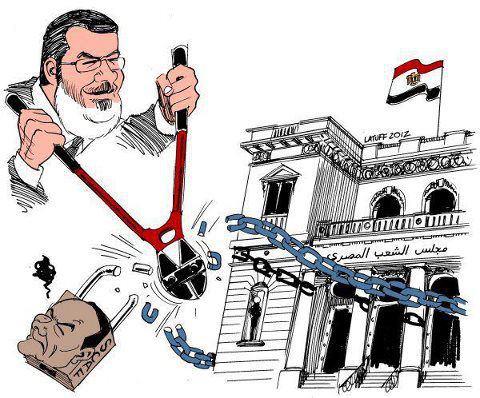 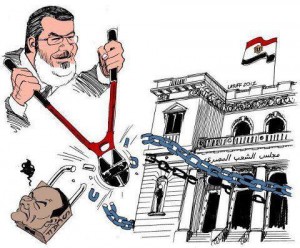 Egypt’s new president, Mohamed Morsi, has reinstated the People’s Assembly dissolved by the Supreme Council of the Armed Forces after a Constitutional court decision. Through a presidential decree, he ordered the “reconvening of the elected parliament to hold sessions,” according to a presidential statement read out by Morsi’s aide Yasser Ali. He also asked for parliamentary elections to be held as soon as the new constitution is dealt with.
The reinstated parliament which had almost half of its seats occupied by the Muslim Brotherhood was dissolved last month by the Supreme Council of the Armed Forces (SCAF) two days after the Constitutional court ruled the 2011 parliamentary elections law unconstitutional. SCAF went on to give itself legislative powers while awaiting a new president and new legislative body to be put in place.
The speaker of the People’s Assembly welcomed the move because it is “respectful to the supremacy of the law and public institutions.” He went on to say that “the People’s Assembly will resume its legislative oversight powers immediately once it is in session within hours, in respect of the legitimacy of the Constitution and the law.” Muslim Brotherhood’s political arm, The Freedom and Justice Party, is already calling for marches to Tahrir Square from mosques in Cairo in support of the decree.
“The executive decision to overrule the Constitutional Court is turning Egypt from a government of law into a government of men,” said El Baradei, an opposition figure. Meanwhile, members of SCAF have assembled for an urgent meeting concerning the issue which caught them off guard. The administrative court should also meet on Monday to rule on the validity of the dissolution of the lower house by SCAF.