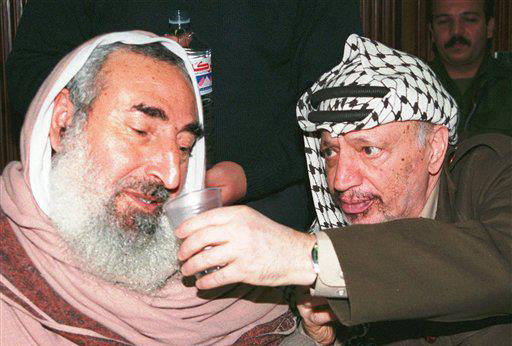 An investigation by Aljazeera is suggesting that Yasser Arafat may have died from poisoning after highly-radioactive polonium was found on his personal belongings, body liquids and excretions forcing his wife to ask for an exhumation for further tests.
Aljazeera carried out a nine month long investigative report in Ramallah, Cairo, Paris, Tel Aviv, Amman and Washington to conclude that the death of the late Palestinian leader was an international plot to bring weaker figures from the Palestinian Liberation Organisation to the front seats.
In Gaza, Ismail Haniah urged legal authorities in Ramallah to order an exhumation and an autopsy to determine the cause of death especially when there’s doubt about it.
Late in a 2005 investigative article, the New York Times pointed clearly to the poison possibility while talking to Arafat’s personal doctor, Ashraf al-Kurdi, who claimed that the Palestinian leader “was poisoned”.
On November 2006, a similar case involved the former KGB officer Alexander Litvinenko who died in a London hospital as a result of poisoning unlikely by radioactive polonium-210. British authorities charged Andrey Lugovoy, but Russia failed to cooperate and the investigation is still underway.
Contacted by MEC, a highly ranked Palestinian official who worked for Arafat during the three years isolation in the compound in Ramallah concluded that “this could be possible only with the help of his staff” claiming that “Arafat eats and drinks from the same plate and bottle with his bodyguards and security personnel”.