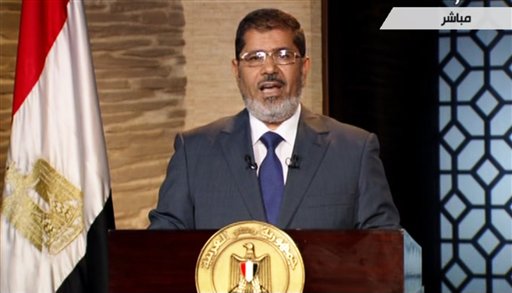 After the delay of the election results till Sunday, the Higher Presidential Election Commission has finally announced the Muslim Brotherhood candidate, Mohammed Mursi, as the winner of the heavily contested presidential elections with 51.73% of the casted votes.
Jubilations could be heard all over Tahrir square and they shouted “down with military rule” too because of the recent modifications they have done to stamp their presence and power in the political arena. The newly elected president said he will be a president for the Egyptians as he calls for unity in order to face the hard times they are in because “the revolution still continues” as he described the event as being a “historic day”.
Critics fear that he will rule the country with Islamic principles and say that he is powerless since the Supreme Council of the Armed Forces (SCAF) has limited the power of the president. Mursi has resigned from the brotherhood and the Freedom and Justice Party, the Brotherhood’s political wing in a move to free himself from his oath of allegiance to the party and to respect his campaign pledge. Reports have also been circulating that the Brotherhood’s political leader, Khairat al-Shater, has met with SCAF to clearly figure out what the president’s role will be before the official announcement.
The defeated Shafiq congratulated the new president and various congratulatory messages have started arriving from Egypt and abroad. Israel pinpointed the continuity of the peace treaty between the countries even though Mursi in his speech noted the preservation of all international agreements. Mahmud Zahar, a senior Hamas official welcomed the results but described it as “a defeat for the program of normalisation and security cooperation with the enemy (Israel).