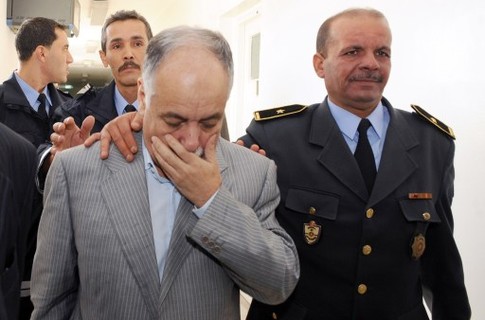 The last Prime Minister to serve the late Mouammar Ghadafi, Al-Baghdadi al-Mahmoudi, has been extradited to his native country by Tunisia on Sunday after a push and pull between the two countries. Both countries have confirmed the extradition that many believe might tempt other countries hosting high level authorities of the Ghadafi regime to follow.
If Libya is happy about the extradition, all doesn’t seem to be well in Tunis as it appears that tension is rising between the president and the prime minister’s office because according to Aden Manser, who serves as a presidential advisor, “President Moncef Marzouki did not sign any decree” before that adding that the “decision will have repercussions on the relationship between the presidency and the government.” A source also claimed that the president was not consulted.
President Moncef has stopped short of executing a court extradition order issued since November because he deemed the environment in Libya unstable. Although the president was opposed to the extradition in principle, he was willing to hand him over if a fair trial was assured.
In a released government statement, it was highlighted that the decision was taken based on a delegation’s report from Tripoli which stated that the necessities for holding a fair trial were present on the ground before adding that an extradition doesn’t need the signature of the president.
Arrested in September on his way to Algeria, Al-Baghdadi al-Mahmoudi was charged for illegally entering Tunisia before being sentenced to six months in prison. An appeal will overturn the sentence but keep him under state custody.
Human rights groups fear that he will be tortured by the Libyan authorities who said that he is in prison and under the eyes of the ministry of justice and the judiciary police.