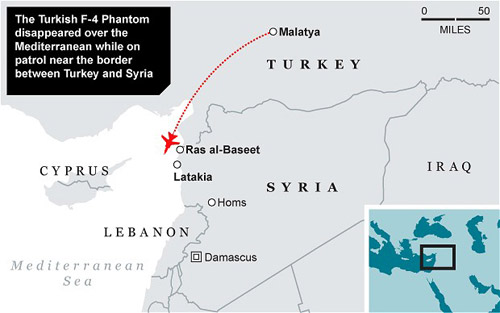 Following the shooting down of its F-4 phantom aircraft by the Syrian air force on Friday, Ankara has now decided to refer to article 4 of the NATO’s founding Washington Treaty to call for consultations with NATO members which will be held in Brussels on Tuesday.
The aircraft according to Turkey’s Foreign Minister, Ahmet Davutoglu, after discussions with military officials was on a testing mission to evaluate the country’s radar system and was unarmed when it came under attack. Syria claims that an “unidentified aircraft” violated its international airspace and it dealt with it accordingly as stated in “the laws that govern such situations” before realising that it was Turkish.
Turkey admits that its aircraft entered Syrian airspace for a brief period without posing any danger and was easily identifiable too. Minister Davutoglu accused Syria of not following the required procedures necessary before engaging an aircraft which involves warning, scrambling and forcing the aircraft to land. He cited that there “wasn’t enough time to do any of that in the time that our plane was in Syrian airspace” and insisted that the attack happened in the international airspace, “13 miles from the Syrian coast”.
However, Syria in a released statement said it shot it down about half a nautical mile away from its coastline when the airspace was trespassed at a low altitude and at a very high speed before it went into flames and fell 5 nautical miles away from the village of Om al-Tuyour, off the coast of Latakia province.
The US and UK have condemned the attack and held Syria responsible while UN’s Secretary General commended Turkey for its restrain. Iran has called for calm.
Syria and Turkey used to be close allies before the protests in Syria begun.