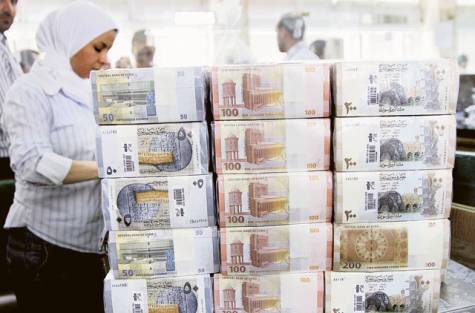 Bankers in Syria have said that the government has released new banknotes into the system which are believed to be printed in Russia. The new move is in line with Damascus’s aims at curbing inflation and easing its fiscal deficit after more than a year and a half long protest; which has now turned to be seriously violent.
The released amount is undisclosed but the bankers believe they are in trial amounts and are already in circulation in Damascus and Aleppo. They will replace worn-out notes and be used to pay government bills and salaries. However, there are fears that that this new government strategy will only aggravate the country’s economic situation. Syria’s government lacks revenues due to sanctions, inflation stands at 30% and it is continuously rising, the central bank has reached the borrowing climax from public banks and the private banks are unwilling to buy government bonds; therefore the government was obliged to release new banknotes to pay its deficit according to one of the bankers because it was its “last resort”.
Given the above named difficulties, the outgoing Syrian Finance Minister, Mohammed Al Jleilati, claimed that the country will survive its current hardship because of its self sustainability. He acknowledged that the “sanctions have negatively impacted the Syrian economy by forbidding it to export oil and not allowing ships to transport or for insurance companies to cover ships transporting to and from the country” but he quickly added “ that doesn’t mean that our economy will collapse and it won’t because we in Syria depend on our own resources.” “We have enough to cover our agriculture, grain and wheat demands” he hinted.