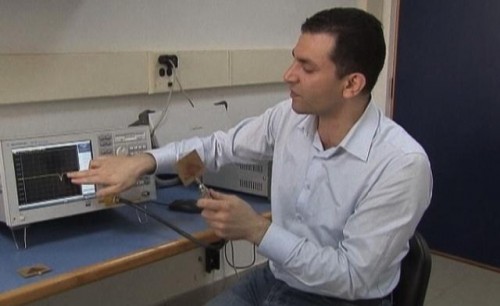 After two years of hard work before successfully testing the prototype of their imagination drawn from a cedar tree, engineers at the American University of Beirut (AUB) have started what can turn out to be a new page in the history of modern technology. An antenna designed for wireless and 3G connections with the shape of Lebanon’s national icon, which also figures on the national flag, has successfully been tested.
According to Mohammed Al Husseini, a member of the team, a closer look at the antenna’s design shows that it is formed by triangular shapes repeating themselves which means “we can use this antenna to operate at multiple frequencies and this is our goal, so the symbolism of the cedar and then the fractal shape of the cedar.”
In addition to that, wireless devices can easily connect to the antenna because it has a switch to adapt the frequency. He precised that “a switch is either on or off. When we change the state, this frequency moves from one part to another part, so this corresponds to another case of the same antenna so the switches are different and as you can see the frequency shifted.”
The team is dedicated to extend the new technology to the transmission of television bandwidth as Mohammed Al Husseini clearly stated that “this is for the future”.
The antenna owes it success to its fractal antenna performance which is based on the geometry of the conductor rather than the interaction of several parts. AUB has already applied for a patent in the US. The antenna has a cost price of $6 and it could be minimized to some cents if mass production begins.