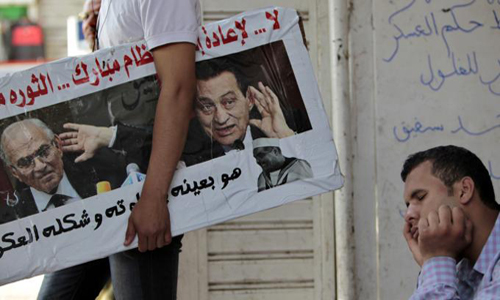 Egypt has less than two weeks before the runoff of the presidential elections take centre stage between Mohammed Mursi of the Muslim Brotherhood and Mr. Ahmed Shafiq.
Both candidates are hard on their campaigns. During one of his campaigns, Mr. Shafiq said he “represents a secular state” whilst “the Brotherhood represents a sectarian state”. He cited that he represents progress and light. He accused the Muslim Brotherhood of being a “secretive group” stands for backwardness and darkness.
However, the occupation of the Tahrir Square after the verdict of Mubarak’s trial risks bringing everything to a halt. Protesters are calling it illegitimate. Mubarak is handed a life sentence in jail but two of his six top police commanders went scot free from their charges of being responsible for the killings because of the lack of concrete evidence. Mubarak and his two sons were also acquitted on corruption charges but the latter have to face charges of money laundering.
The nationwide protest is gaining intensity and Mohammed Mursi has asked protesters to continue the revolution in order to reach their goals. Many of the protesters are against Shafiq because they believe that he also played a part in the killings during the revolution when he was a Prime Minister.
Protesters have been filling Tahrir Square for different reasons. Some are there because they are frustrated with the options they have for the presidential runoff, others are against Mr. Shafiq’s qualification as a candidate, while Mursi and Muslim Brotherhood are campaigning and there are those who are not satisfied with the verdicts of the Mubarak and Co. trial.
Both the prosecutor and Mubarak’s lawyer have promised to appeal the verdict. The elections are fast approaching under such an unpredictable and unstable environment.