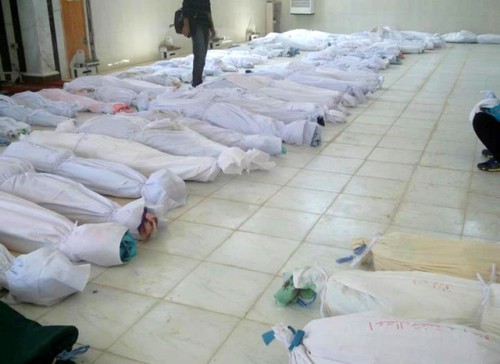 Following the massacre that took place in the town of Houla, the UN’s Security Council held an emergency meeting to discuss Syria’s chaos. After a three hour meeting, the Security Council released a statement condemning the Friday massacre in Houla “in the strongest possible terms”. The killing of civilians by close range shooting or physical abuse was also condemned unanimously.
The government is accusing the terrorists of carrying out such an act although some of the UN Security Council members believe it’s the work of the government forces. Assad’s biggest ally, Russia, harbored reserves with regards to the accusations. Russia’s deputy ambassador to the UN urged for investigations to determine the culprit because it believes that more than half of the victims had been slashed, cut by knives or killed at a point blank distance. It is also seeking to be briefed by the head of the UN monitor team in Syria before agreeing on accusing the government. More than 100 people have been killed in Houla with children accounting to almost 40 of the victims.
The outgoing president of the Syrian National Council, Burhan Ghalioun, described the killings as a “turning point” and proclaimed that the time for the “battle of liberation and dignity” has arrived; henceforth calling upon all the Syrians to be engaged “relying on its own forces, on the rebels deployed across the country and the Free Syrian Army brigades and friends” during a news conference in Turkey. He did seek for the implementation of UN’s chapter seven which authorises military intervention.
An emergency meeting is to be held between the members of the Arab League. Foreign ministers of the league will meet to evaluate the situation in Syria before deciding on the steps to take at the meeting.