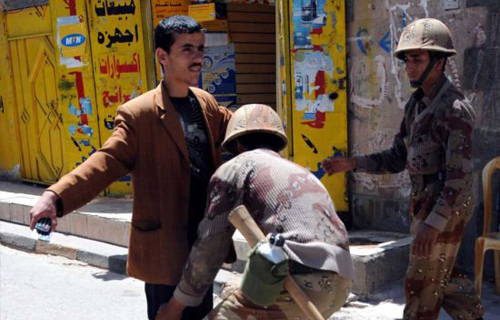 Yemen marked its National Day of Unification under tight security at the Air Force Academy after a bomb explosion, a day earlier, claimed the lives of those at the rehearsals. It is celebrated annually on the 22nd May to mark the unification of South Yemen and North Yemen. It is marked as a public holiday in the country.
The day is characterized by festivities, public celebrations and activities but the bomb explosions just after the rehearsals on Monday has reduced  the celebrations to a limited audience because the terrorist group which claimed responsibility threatened that it will strike again to revenge the attacks that they subdue in the south from the government forces backed the US military. It also referred to the bomb that killed more than 100 people, majority of them soldiers, and left many injured without their limbs as the beginning.
The explosion was barely 200 metres away from the presidential palace. The president embarked on sacking several individuals of the top brass of the security forces.
The group which calls itself the Ansar Al–Sharia and affiliated to the Al-Qaeda in the Arabian Peninsula (AQSA) released a statement promising that it “will take revenge, God willing, and the flames of war will reach you everywhere, and what happened is but the start of a jihad project in defense of honor and sanctities.” The military Chief of Staff has assured the population in a speech during the ceremony that the end of the terrorist group is near.
A group of aid agencies in Yemen have also urged the Friends of Yemen meeting in Saudi Arabia to ease Yemen out of its crisis. It has also warned that an urgent intervention is needed to fight the population’s undernourishment which is beginning to run out of hands.