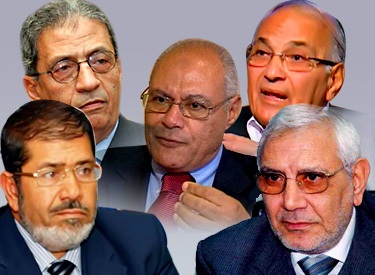 Political campaigns have come to an end in the run up of the first presidential elections in Egypt after the ousting of Housni Mubarak. All political parties and independent candidates are now banned from having public activities. The ban is in line with the Supreme Presidential Election Commission’s ambitions to make the experience peaceful. The rule is widely known as the “election silence”.
Voting will be held on Wednesday and Thursday. Egyptians living abroad have already voted and unofficial results have given Mohammed Mursi of the Muslim Brotherhood the lead although it seems to be insignificant. The overseas voters are just a little above 500,000 whilst there are more than 40 million in Egypt.
There are 13 candidates in the race but only 5 are stealing the spotlight. Former Arab league chief Amr Moussa; Islamist Abdul Muniem Abul Fotouh; Muslim Brotherhood candidate Mohammed Mursi; last prime minister of Mubarak’s era Ahmed Shafiq and leftist leader Hamdeen Sabbahi.
The Supreme Council of the Armed Forces has said that the presidential powers will be defined after the elections.