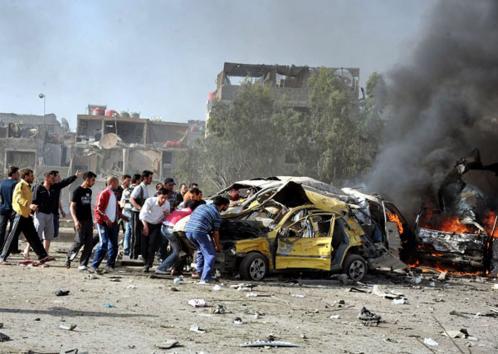 Explosive devices have struck the vehicles of the UN monitors in different places across the country in recent days and some members of the team also got caught in the midst of gunshots.
During a funeral ceremony, government forces opened fire on the attendees and caused more than 20 deaths according to unconfirmed reports. The UN monitors were also present on the ground to observe and meet some of the locals when the incident occurred. One of the vehicles was hit by “an explosion from an improvised explosive device” according to the spokesman, Ahmad Fawzi. In the recent days, the monitors have also been hit by an explosion in Deraa and some found themselves in a firefight during a visit to al Rastan. There are almost 200 UN monitors in Syria but violence stills continue.
The EU’s Foreign Ministers have announced their continuing support to the Kofi Annan Peace Plan and that they are awaiting the next report. It also agreed on new sanctions against Syria.
The Arab parliament called for a peaceful way out of the crisis and buttressed on supporting the proposal’s of Kofi Annan during their meeting in Cairo. It condemned the violent acts and the loss of civilian lives. It also joined Syria in condemning the operations of Israel in the Golan Heights. It called upon Israel to stop its oil exploration acts in the area and to have respect for the international law. The resolution 497 of the UNSC regards Israel’s activities in the area as null and void.
In a separate development, the Higher Committee for Elections has announced the results of the May 7th elections with participation a little over 50%. Some of the opposition political parties boycotted the elections.