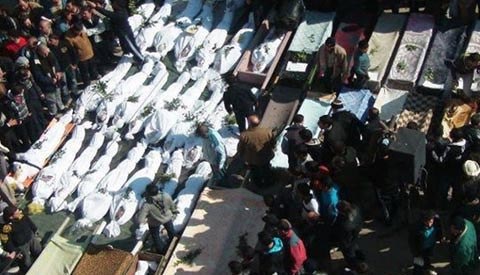 Despite the ceasefire being more than a fortnight old, violence in Syria doesn’t look like ending any time soon. Recent bombings in the northern town of Idlib on security buildings and civilian institutions are clear evidences.
The intelligence headquarters’ of the Air Force and the military intelligence building in Idlib have suffered what is believed to be  a suicide twin bomb car attack rocked them leaving at least 20 people dead, many injuries and close by buildings rattled to the ground, with both attacks coming five minutes apart. Majority of the victims are said to be military personnel. The two buildings are a few hundred metres away from each other and two UN monitoring officials live in a nearby hotel visited the scene after the attack. A third explosion went off at the university but no casualties were reported.
State Medias also pointed out that attacks had been carried out on the Central Bank and some damages were done to the building. No deaths or injuries were reported.
The leader of the UN monitoring mission who arrived in Damascus on Sunday, Major General Robert Mood, has asked for cooperation in order to bring the situation under control as “even 1,000 unarmed observers cannot solve all the problems” in Syria.
A blame game is being played by the government and the activist. The government blames “armed terrorists” for the bombings and killings of government buildings and personnel respectively wherein the activists consider some of the bombings as government’s tactic, as they are carried out by the government itself, in order to distract regional and international attention from brokering a permanent and effective peace deal whilst it continue the killings of its citizens.