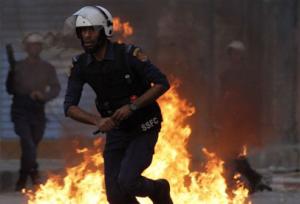 Bahrain’s village of Al Eker has been rocked by a terrorist bombing that left seven policemen injured, three of them critically. According to Bahraini authorities, the blast was caused by a home-made bomb that targeted security forces stationed at the entrance of the village that witnesses daily rioting and acts of vandalism staged by pro-democracy protesters.
The injured policemen suffered severe burns and serious wounds caused by a petrol bomb that went off when the security agents got off their vehicle to clear the road blocked by a tree.
The attack was condemned by several Arab and western countries that have expressed their solidarity with the Bahraini people and leadership.