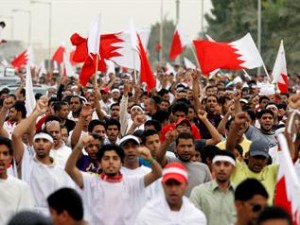 Bahraini security forces have clashed with thousands of young protesters who tried to flock and rally at the Pearl Roundabout, in the capital of Manama, to mark the one-year anniversary of pro-democracy demonstrations.
TV footage showed protesters hustling away from clouds of tear gas fired by riot police deployed massively in the country to prevent people from taking to the streets.
The demonstrators, who are from the Shia majority, are demanding freedom, accountability, political reforms and a constitutional monarchy.
The government of Manama says it is making serious political reforms and consolidating the democratic process but the opposition and human rights activists affirm that so far little has been done in the oil-rich country ruled by a minority Sunni royal family.