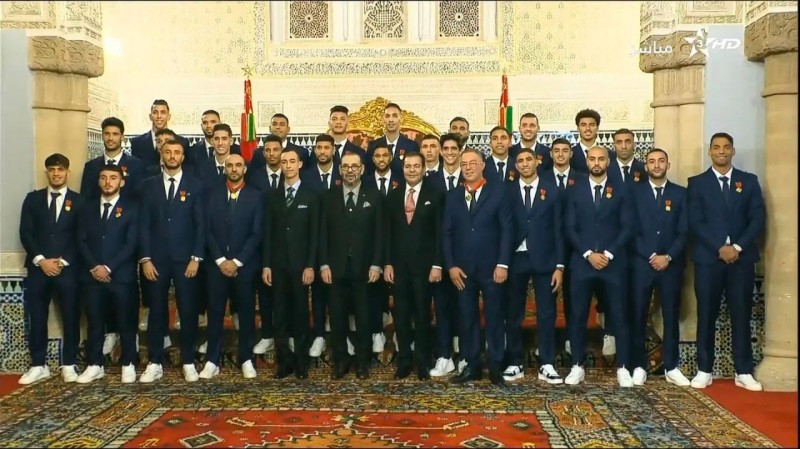 King Mohammed VI received on Tuesday the Moroccan national football team in the Royal palace in Rabat, in recognition of their achievements in the Qatar World Cup.

Accompanied by Crown Prince Moulay El Hassan and Prince Moulay Rachid, the monarch offered Royal wissams (medals) to the players of the national team, as well as to the squad’s head coach Walid Regragui for his efforts in training and successfully leading the Atlas Lions throughout the global event.

The King decorated both the President of the Moroccan Federation of Football Faouzi Lekjaa and Walid Regragui with a second class Order of the Throne Wissam (Commander).

King Mohammed VI, Moulay El Hassan, and Moulay Rachid then posed with the national team and their mothers for a souvenir picture. Mothers of the Moroccan players were also present at the royal reception as the King insisted on including them in the event.

The players and technical staff also presented gifts and souvenirs to the King, as thanks for his support during their run at the global tournament.

The Atlas Lions arrived at the Rabat-Sale international airport earlier today, where they were met with a huge crowd of eager fans lined up across the streets, welcoming the Moroccan squad following their fairytale World Cup run.

Armed with Morocco’s flags, the national team and their head coach Walid Regragui toured across the cities of Sale and Rabat in an open bus as fans from all walks of life cheered for them.

The royal family has been an outspoken supporter of the Atlas Lions throughout the World Cup, including King Mohammed VI who joined street celebrations after Morocco’s shock win against Spain in the round of 16.

The national team has achieved historic milestones at the global tournament in Qatar, causing euphoria across the country, Africa, and the Arab World. Morocco became the first African and Arab nation to reach the World Cup’s semi-finals.

In addition, the North African team emerged as the tournament’s underdogs and defied all odds, after predictions and statistics suggested that the team would not make it past the group stage.

However, the Atlas Lions achieved the unexpected as they defeated and sent home some of the tournament favorites, including Belgium, Spain, and Portugal. Support for the Atlas Lions extended far past Morocco or Africa, with all neutrals rallying behind the team in the competition’s advanced stages.

© Morocco World News. All Rights Reserved. This material may not be published, rewritten or redistributed without permission.