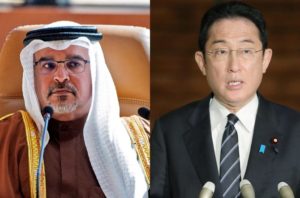 Japanese Prime Minister Fumio Kishida expressed his intention to cooperate with Crown Prince Salman bin Hamad Al Khalifa, Prime Minister of Bahrain, in fostering a closer bilateral relationship, the foreign ministry in Tokyo said, according to Arab News.
This came during a telephone conversation between Kishida and the Crown Prince on Tuesday.
Al Khalifa, the ministry said expressed his renewed hopes for strengthening the bilateral relationship, and expressed his appreciation for Japan’s cooperation in the launching of the Bahrain-UAE joint nanosatellite “Light-1” from the Japanese Experiment Module “Kibo” on the International Space Station.
Both leaders, the ministry also pledged to boost cooperation in various fields, in both the public and private sector, through signing the agreement between Japan and the Kingdom of Bahrain for “the Reciprocal Promotion and Protection of Investment” at an early time.
Their discussions also touched on the situation in Ukraine and how to shape the framework of the international order going forward, including the United Nations Security Council. They also confirmed that Japan and Bahrain will continue to closely coordinate their response to the situation.
In addition, both sides confirmed that Japan and Bahrain will cooperate towards the stabilization of the international oil market. The two countries are marking this year the 50th anniversary of the establishment of their diplomatic ties.