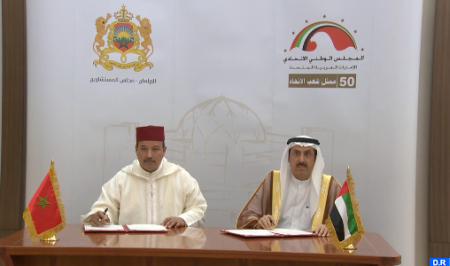 The President of the Federal National Council of the United Arab Emirates (Parliament), Saqr Ghobash, said, Tuesday, that the support of his country to the Moroccanness of the Sahara stems from its full conviction of the right of the Kingdom to preserve its territorial integrity.

After talks he held in Abu Dhabi with speaker of the House of Advisors, Naama Mayara, Ghobash told MAP that he reaffirmed to his interlocuter that the UAE supports with full conviction the territorial integrity of Morocco and the right of the Kingdom to preserve its territorial unity.

He added that this is the official position of his country on this issue, a stance that has been enshrined and confirmed by the opening of a consulate general of the United Arab Emirates in the city of Laayoune in November 2020.

He stressed that this official position in favor of the territorial integrity of the Kingdom, followed by similar positions of a group of countries, including those of the Gulf Cooperation Council remains “constant”.

The talks between the speaker of the House of Advisors and the president of the Federal National Council of the United Arab Emirates focused on the prospects for strengthening parliamentary cooperation between the two countries.

Both parties reaffirmed their willingness to exchange their experiences in this regard in a way that strengthens the ties of cooperation between the two institutions, and ensures the continuation of fruitful dialogue with the aim of unifying strategic visions aimed at achieving sustainable development and promoting peace, stability and coexistence at regional and international levels.