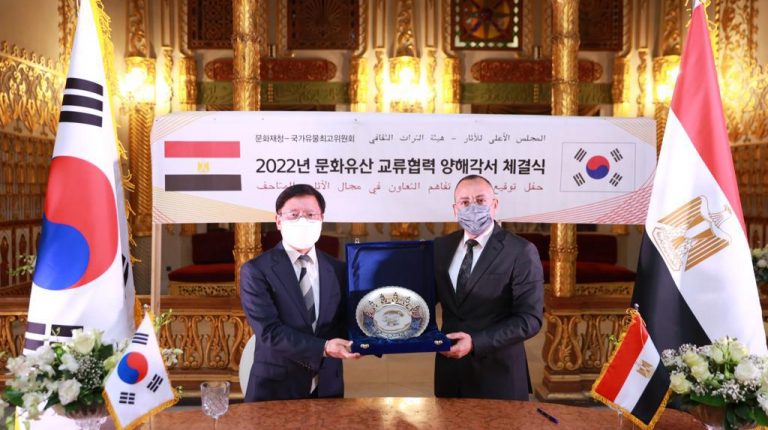 Egypt and South Korea have signed a memorandum of understanding (MoU) for cooperation between the two countries in the fields of antiquities and museums online on the sideline of the visit of the leader of the Asian country, Arab Finance reports.
Mostafa Waziri, the Secretary-General of Egypt’s Supreme Council of Antiquities and Kim Hyun-Mo, the Head of the South Korean Cultural Heritage Administration (CHA) inked the deal.
The agreement aims at contributing to establishing policies for the sustainable preservation of cultural property, supporting mutual cooperation in the fields of antiquities and museums, as well as exchanging experts and expertise between specialists from both countries.
Both countries, equally under the deal, will strengthen cooperative projects related to combating illegal trafficking of culture. They will also exchange experience in the field of cultural heritage management, managing archeological sites, their institutions and museums, sunken antiquities, the preservation, maintenance, and protection of cultural property, Arab Finance notes.
President Moon Jae-in visited the Arab country last week as part of his international tour which also took him to the UAE.
South Korea’s envoy to Egypt, Hong Jin-wook, also announced that Seoul will provide the North African country $1 billion as loan, with further details.
Both countries also, according to Jin-Wook during the South Korean leader’s visit, would hold talks in view of signing a trade agreement between the two countries during the visit.
Cooperation on EVs, water desalination, green hydrogen and renewables are among the other top priorities for discussion.