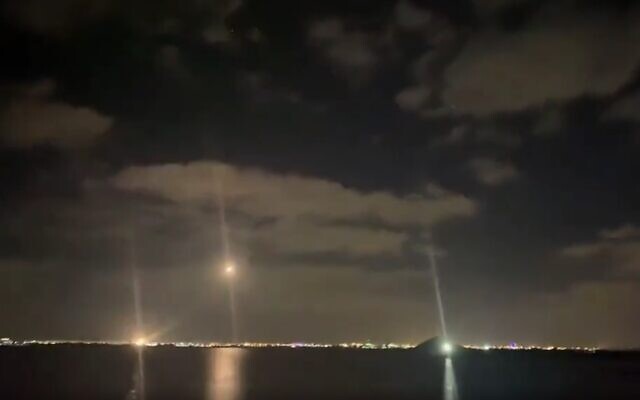 Two ballistic missiles aimed at Abu Dhabi were shot down in the early hours of Monday, the Ministry of Defense has said.

Authorities confirmed “that the attack did not result in any casualties, as the remnants of the intercepted and destroyed ballistic missiles fell in separate areas around the emirate”.

Flashes were seen in the sky over the capital at about 4.30am, residents said.

The ministry said “it is ready to deal with any threats and that it is taking all necessary measures to protect the state from attacks”.

In Saudi Arabia, the Coalition said it destroyed a ballistic missile launched by the Houthis towards the city of Dhahran Al Janub early on Monday.

Shrapnel from the intercepted missile landed in the city’s industrial zone and pictures of burnt vehicles were published by local media.

The attacks came just hours after the Arab League held an emergency meeting at the level of permanent representatives in Cairo to discuss the Houthi militias’ terrorist attacks against civilian facilities in Abu Dhabi on January 17.

The meeting condemned the strikes on Abu Dhabi and called on the international community to designate Yemen’s Houthi rebel group a terrorist organization.

The attacks constituted a “blatant breach” of international law and a “genuine threat to vital civilian installations, energy supplies and the stability of the world economy”, the pan-Arab group said at the end of the Cairo meeting.

The strikes had laid bare the “terrorist nature” of the Houthi rebels and exposed their aim of undermining regional peace and stability, the Arab League said.

After the blasts of January 17 that killed three oil company workers and injured six, the US administration condemned the attacks and said it is considering to designate the Houthis a terrorist group.

The UN Security Council had also unanimously condemned the strikes as “heinous terrorist attacks” and called for the perpetrators to face justice.