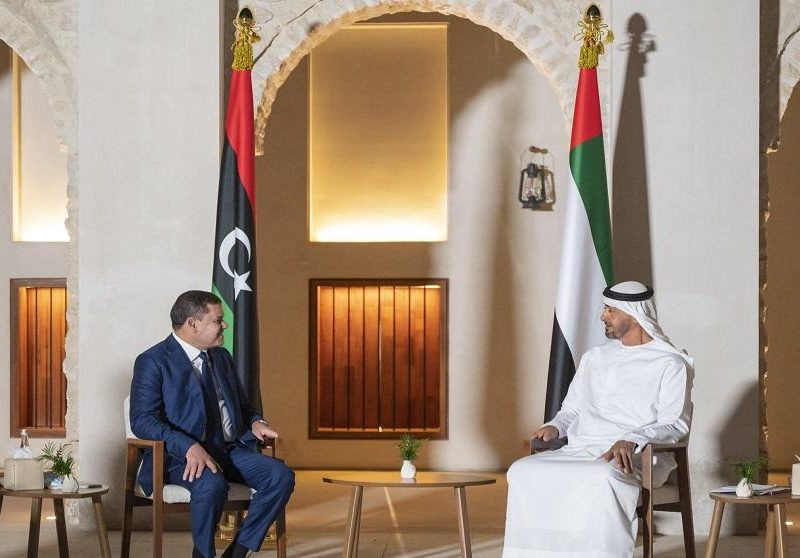 The Libyan leader sought the support of these countries for his government and tried to obtain from them a unified position regarding the crisis in his country.

The United Arab Emirates was an important stop of this tour, as Abu Dhabi, which now claims to support the new Libyan authorities, was among the main allies of renegade Marshal Khalifa Haftar.

Sheikh Mohamed Bin Zayed, the Crown Prince of Abu Dhabi, renewed his country’s support to the new Libyan executive and its action “to ensure the security and stability of Libya,” said a joint statement issued at the end of the meeting he held with Dbeibah’s late Wednesday evening.

According to sources close to the Libyan Prime Minister, Abdel Hamid Dbeibah wanted to reverse the trend and get UAE support for the Libyan state. He also wanted clear positions regarding the Chadian and Sudanese mercenaries sent to Libya to support Khalifa Haftar.

In exchange, the Emirates have obtained the promise of a significant quota in the reconstruction of Libya. Moreover, Abdel Hamid Dbeibah said that his country aspires to a “strategic partnership in different areas” with the Emirates.

Sheikh Mohammed pointed out during the meeting that his country expects a unified international stance towards Libya based on securing the common interest of the country in a way that reinforces the prospects of stability and security and guarantees Libya’s sovereignty over all its territories.

“It was an honour to meet our brother Abdul Hamid Dbeiba, Prime Minister of Libya’s Government of National Unity. Libya will overcome its challenges and we stand by the Libyan people at this critical moment. Hopefully the new roadmap will lead to stability and unity,” tweeted Sheikh Mohammed.

Throughout his tour, the businessman-turned-Prime Minister invited the Gulf countries to increase their investments in Libya, a country that is struggling to emerge from ten years of chaos and violence.

As a sign of appreciation, the Libyan Prime Minister began his tour with Kuwait. This small Gulf country has always remained neutral towards the Libyan crisis and has always supported dialogue.