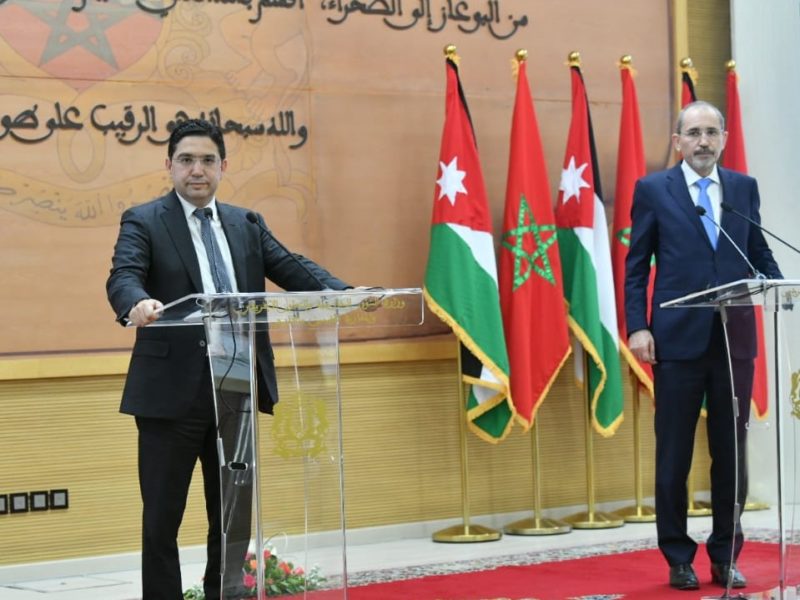 The opening of a Jordanian Consulate General in Laayoune on Thursday is a token of the strong and strategic ties biding Jordan and Morocco, and proves once again that Jordan “was and will always be on Morocco’s side” concerning the Sahara issue, said Jordanian Foreign Minister Ayman Al-Safadi, Thursday in Laayoune during the inauguration of the Jordanian consulate in the Saharan city.

Today’s inauguration “confirms the firm position of Jordan that was and will always remain on the side of the Kingdom of Morocco” concerning the issue of its territorial integrity, Al-Safadi stated at a joint press briefing with his Moroccan peer Nasser Bourita.

This initiative proves that “we are working with our brothers to resolve the issue of Moroccan Sahara, in line with the resolutions of international legality and the autonomy initiative submitted by Morocco,” he said, describing this proposal as a “practical and logical” solution to settle this artificial conflict.

Jordan’s top diplomat, who is also deputy Prime Minister, deemed it necessary for Arab countries to join efforts, focus on common challenges and overcome tensions so as to ensure that “all our peoples enjoy their right to a better and dignified life.”

Echoing himn Bourita said the opening of Jordan’s Consulate General in Laayoune is a reaffirmation of the constant and historic solidarity of Jordan with Morocco in all its actions to defend its interests and fundamental causes.

The two Foreign Ministers also stressed the strong bonds of friendship and fraternity uniting the leaders of the two countries, as well as the strategic and active solidarity and permanent coordination between the two kingdoms and their common will to develop their fruitful cooperation as a model of cooperation between Arab countries, serving common interests and helping achieve the development of Arab countries.

They also emphasized the political consultations between the two countries for the development of joint Arab action and the defense of Arab causes, mainly the Palestinian cause, underlining that Rabat and Amman share the same vision and are working together to achieve a “just and lasting” peace respecting all the legitimate rights of the Palestinian people, especially their right to an independent state within the borders of June 4, 1967, with Al-Quds Asharif as its capital.

They stressed in this vein the important role played by the Al-Quds Committee, chaired by King Mohammed VI, in protecting the Arab-Islamic identity of this city and the historical Hashemite custodianship of Christian and Muslim holy sites in Al-Quds Asharif.

In that regard, Bourita recalled the social, medical and academic projects funded by the Bayt Mal Quds Agency in the holy city as well as its recent financial support to the Maqdessis during the health crisis related to the Covid-19 pandemic.

Regarding the conflicts in some countries in the region, Jordan and Morocco have always worked for an active Arab role in efforts to end these crises, particularly in Syria, Libya and Yemen, they added.

Commenting on the setting up of the consulate, Jordanian professor of international law, Omar Mahmoud Amr, said the move is a reaffirmation of Morocco’s historical right to sovereignty over its entire territory, in accordance with international law.

The inauguration of this consular representation constitutes at the same time a way to close Arab ranks regarding crucial causes and also reflects the solidity of fraternal relations rooted in history between the two countries and peoples, he said.

Jordan is the 11th country to have inaugurated a consulate in Laayoune, after the United Arab Emirates, Bahrain, Côte d’Ivoire, the Comoros Islands, Gabon, Sao Tomé and Principe, the Central African Republic, Burundi, Eswatini, and Zambia.