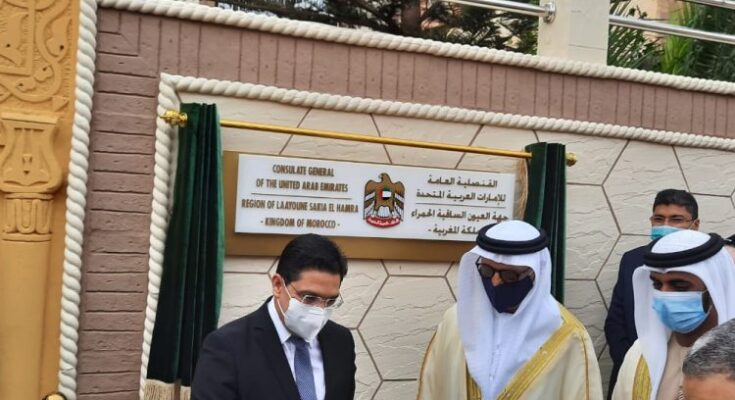 The United Arab Emirates (UAE) has officially inaugurated its Consulate General in the Moroccan Saharan city of Laayoune, this Wednesday, November 4.

The United Arab Emirates becomes the ninth country to open a diplomatic representation in Laâyoune, in less than a year.

It is also the first Arab country to establish a diplomatic representation in the Moroccan southern provinces, a move reiterating the Gulf country’s support for Morocco’s sovereignty over the Sahara.

Crown Prince of Abu Dhabi Mohammed Bin Zayed Al Nahyan had announced his country’s decision on October 27 during a phone call with King Mohammed VI, who had described the decision as a historic act that reflects the UAE’s support for Morocco’s territorial integrity. The King had underlined the significance of the move, especially that the United Arab Emirates had taken part in the Green March in 1975.

According to observers, the UAE’s decision would undoubtedly encourage other Arab countries to materialize their support for Morocco’s territorial integrity with the opening of diplomatic representations in the Moroccan southern provinces.

The UAE consulate inauguration is thus giving a new impetus to the diplomatic momentum in the Sahara and helps assert Morocco’s legitimate sovereignty over the region.

So far, and in less than a year, 16 African countries from West Africa, Central Africa, Eastern Africa and Southern Africa have opened consulates in the Sahara cities of Laayoune and Dakhla.

The countries having a diplomatic representation in Laayoune are the Comoros Islands, Gabon, Central African Republic, Sao Tome and Principe, Burundi, Côte d’Ivoire, Eswatini and Zambia, while Burkina Faso, Djibouti, The Gambia, the Republic of Guinea, Guinea-Bissau, Equatorial Guinea, Liberia, and Senegal have opened consulates in Dakhla.