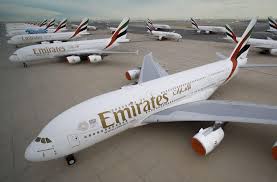 Emirates will resume the payment of full salaries to its employees from October, Gulf News reports citing spokesperson of the Dubai-based airline.

The move, which signifies a steady pick-up of the airline’s activities, comes after reports of government stimulus package of $2 billion to help the carrier weather the consequences of the covid-19 pandemic.

The airline has resumed flying to 90 destinations.

Like most airlines around the world, Emirates was forced to ground its fleet due to the pandemic and has seen its profit drop by 28 per cent from a year earlier for the financial year ended March 31.

The pre-covid salary restoration move has been confirmed by two employees of the airline following a letter by the HR.

The letter also stated that allowances of staff and managers in certain categories would see some reductions, Gulf News reports, citing employees.