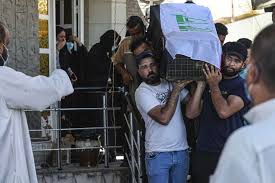 Unidentified gunmen killed Wednesday in the southern city of Basra a key female Iraqi activist involved in months-long protests against corruption and mismanagement.

Reham Yacoub died after the assailants on a motorbike fired at her car. Three other women in the same car were wounded.

She emerged to public after taking active role in the local protests which erupted in 2018.

Reham Yacoub is the second prominent activist to be killed in recent days. Another public figure, Tahseen Osama was assassinated last Friday, prompting a return of street demonstrations for three days in which security forces opened fire on protesters who lobbed the governor’s house with rocks and petrol bombs and blocked several main roads, reports say.

Prime Minister Mustafa al-Kadhimi, reportedly in reaction to Tahseen Osama’s killing, sacked the Basra police and national security chiefs the following Monday and ordered an investigation into the violence. The moves calmed protesters down.